Gluten Free Home Brewing offers the largest variety of malted grains. Shop Our Store to buy malt for your recipe or buy a Recipe Kit. 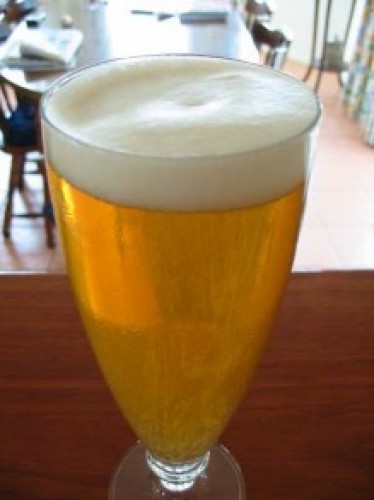 So by now you should have a good idea about how to make your own malt, but this is not our final destination, we need to turn this malt into beer.

Most parts of the gluten free brewing process are similar to normal brewing, which is covered in detail by the experts on this site and others, so I'll only touch on the key differences;

The other key area I'd like to talk about is recipe formulation and beer styles, what I have found that works and what doesn't.

One thing we need to remember when making gluten free beer is that it will be difficult to make a "to style" copy of most traditional beers due to the distinctly different flavours and aromas from the gluten free malts. The exception seems to be the wheat style beers of Germany and Belgium, somewhat ironic given that wheat is the most gluten toxic grain.

I have had very good results in competitions, including a couple of podium finishes, brewing to the following beer styles - wit, weizen, dunkelweizen and roggenbier. The reasons I believe are that the gluten free grains are a bit more wheat like in taste (judges seem to be able to taste wheat or rye in there), they generally give a slight tartness or sourness to the beer, and these beer styles have significant flavour contributions from the yeast and spices.

The most difficult styles to emulate are the more delicate and clean beers like pale lagers and pale ales, here the slight sourness and apple / raisin fruitiness are most unwelcome and in competition judging will usually see the beer marked as infected or having serious fermentation issues. This is more of an issue if sorghum malt is used as the base, less so for millet malt. So you can make these styles but they will be significantly different to the normal versions, but when you don't have a choice you get used to it.

Given all this I think the best approach if you're just starting out with gluten free brewing is to start with a pale ale, but use an English, German or Belgian ale yeast with a bit of character and a generous amount of noble hops. The reason being that you can use mostly, if not all, pale malt with a bit of roasted malt or grain for colour, or other adjunct for flavour. It will also be an easier and quicker process to ferment the beer.

Then you can tweak and play with the recipe until it comes out just how you want it, because in the end you want to make a beer you enjoy drinking, not just a certain traditional style.

With these characteristics in mind we can then run through the available ingredients and select the ones we need to bring our creation to life.

Let's start with the grain bill; it's the reason gluten free beer exists. A brief run down on the brewing characteristics of each of the gluten free grains is as follows:

First it's a matter of picking the base malt, which for me is almost always millet due to its higher enzymatic strength, more traditional flavour and aroma, and reduced sourness. Then we can add roasted malts, crystal malt, raw adjuncts such as puffed amaranth or quinoa to fill out the recipe.

If your level of roasted malts and adjuncts is around the 30-40% range then you will need to conduct your conversion rest when you mash at around 60-62C to ensure the beta amylase lasts long enough to create wort with an apparent attenuation of around 75%. If the grain bill is greater than 95% pale malt then the conversion rest can be done at 65-68C to achieve the same attenuation.

Next on our shopping list is yeast, it is another ingredient that we have to be careful of as most yeast is cultured in a barley wort medium. We need to use yeast that has been cultured in a gluten free medium, usually molasses, which takes us to dry yeast. However, make sure you check with the manufacturer that their brand of dried yeast is gluten free. One that is gluten free is the Fermentis range.

A brief run down on their range available in Australia is as follows;

So, not the wide range available in liquid yeasts, but a good range none the less. The K-97 in particular seems to work well with gluten free grains. Beware the US-56, it is so clean it will expose any unusual flavours. For more information visit the Fermentis web site.

As far as hops and water go its open slather. Try hop varieties until you find one you like - tettnang, hersbrucker, and goldings are my favourites - and then try some more. As far as water goes check out other articles on this web site that deal with the mysteries of water chemistry, the key mineral we need here is calcium to help protect the enzymes and I aim for 100 ppm. The only extra addition I would suggest you add is a pinch of sodium metabisulphite (or 1/8 tsp according to Graham Sanders) to help mop up potential oxidation problems in the mash, the full decoction mash required for gluten free brewing is full of oxidation opportunities.

If you are looking for inspiration I have loaded a number of my recipes onto the website for people to use as a starting point. 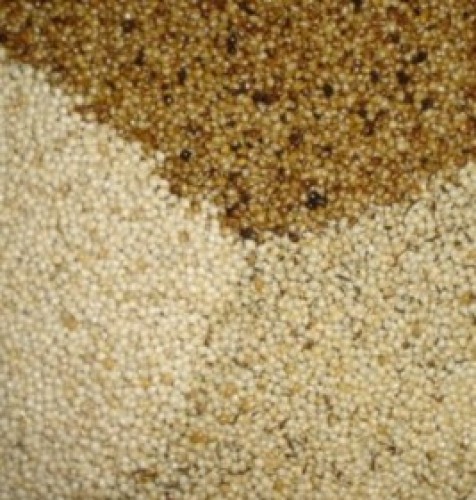 So now let's run through an example. This recipe is one of my favourite ales that I brew on a regular basis, somewhere between an Australian pale ale and an English pale ale in style.

The yeast selected is an English ale yeast, bittered and flavoured with goldings and northdown. This is my first brew with northdown as I had previously used POR for bittering and goldings for flavour.

Recipe is as follows: 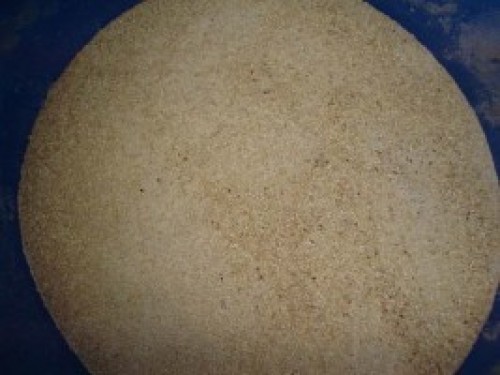 In brewing with barley malt the usual advice is to just crush it enough to crack open the grain, exposing the starch and leaving the husk intact to form the filter bed in lautering. With gluten free brewing the advice is a bit different as the grains do not have a husk, although some do have a thin hull.

If you have access to rice hulls to use in the mash then it is best to crush the grain into flour, as fine as you can. This will give maximum starch conversion and leave only a small portion of the original grain mass in the spent grains. Efficiency up to 95% can be achieved this way. 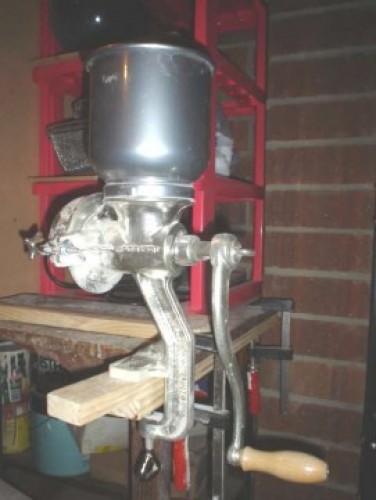 If you don't have rice hulls then it is better to crush coarser and accept a lower efficiency of starch conversion, the large malt chunks left over will form a filter bed and allow the mash to be lautered. This works well for millet, sorghum and maize but efficiency will be closer to 75%.

Either way, it is best to keep the grain bed to 10-20 cm deep to reduce compaction.

While roller mills will work with gluten free grains the best type of crusher is actually a grinder, the corona type mills are well suited to making malt flour.

Using a corona mill with sorghum and maize it is best to run it though for a coarse crush first and then close it up until the two plates are touching to bring it down to flour. Millet can be done on the closed up setting in one pass. 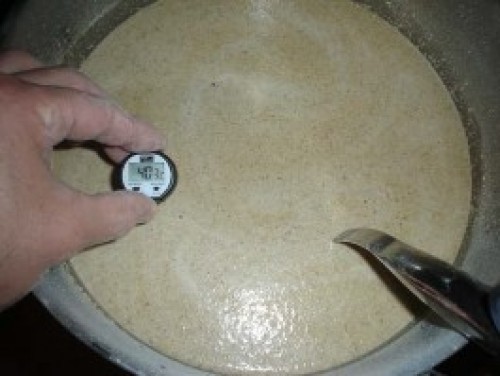 In its most simple form in "normal" brewing, the mash is a matter of mixing the crushed malt with hot water to achieve a temperature of 65-68C, holding this for 60-90 minutes and then lautering and sparging.

A gluten free mash regime is more complicated and combined attributes from a step infusion mash and a decoction mash. To best explain the mash regime for gluten free brewing let's run through our example brew day.

Some explanation of the process is required. Gluten free malts are not fully modified so the mashing regime needs to include a beta-glucan rest at 40C and a protein rest at 55C to help release starch by breaking down the grain structure, reduce gumminess in the mash, provide adequate yeast nutrition, and good head retention properties.

After the 55C rest the solids in the mash have settled to the bottom and there is a clear liquid on the top, this liquid contains the enzymes required to convert the starches to sugar. These enzymes have an operating temperature range of 60- 70C and are destroyed at temperatures above 70-75C. However, the starches in gluten free malt do not fully gelatinise and become available to be converted to sugar until heated to temperatures of 75-85C. Herein lies the problem. 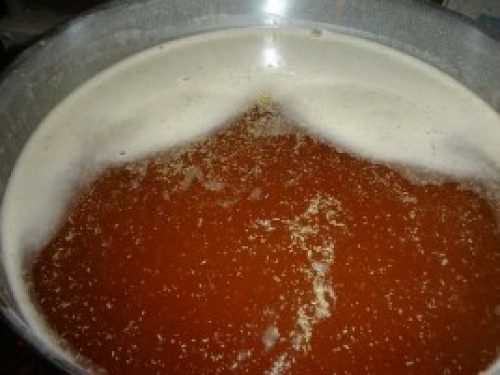 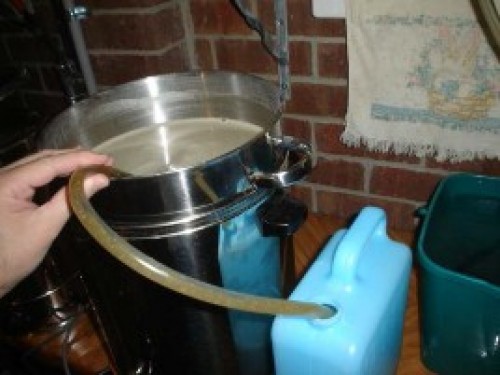 This is why we remove the enzyme liquid from the mash and keep it at <60C to preserve the enzymes, meanwhile we add some extra water to the mash and raise it to 70C to convert whatever starch is available and reduce the viscosity prior to boiling. The boiling (or raising to 85C for 30 min) will gelatinise the rest of the starch. An immersion element is very useful for doing the temperature rises. 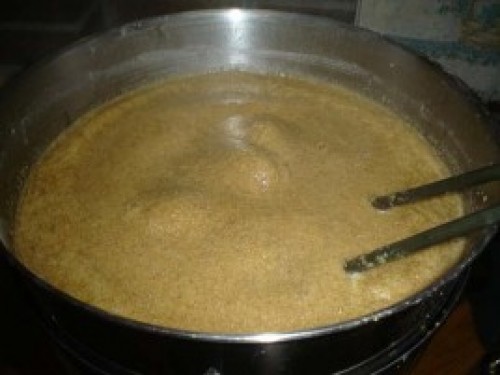 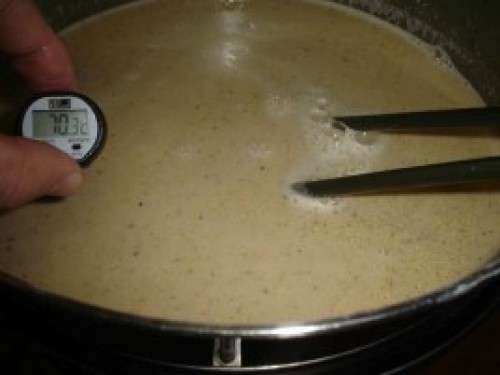 After the mash has cooled we then add the enzyme liquid back to the mash and the alpha and beta amylase can go to work on the gelatinised starch. In this example I have rested at 65C for 90 minutes as I have a high proportion (90%) of pale malt and that should do the job nicely at that temperature.

In comparison, if you were doing a single step infusion mash with barley malt steps 2 to 15 would be replaced with "heat mash water to 75C, add crushed malt and hold temp for 90 minutes".

So that's the complicated part over with, probably 2-3 hours longer than a barley infusion mash. Not for those with a short attention span.

There are two main differences with lautering; rice hulls and grain bed depth. 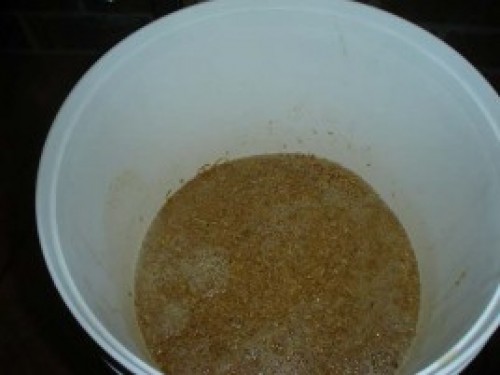 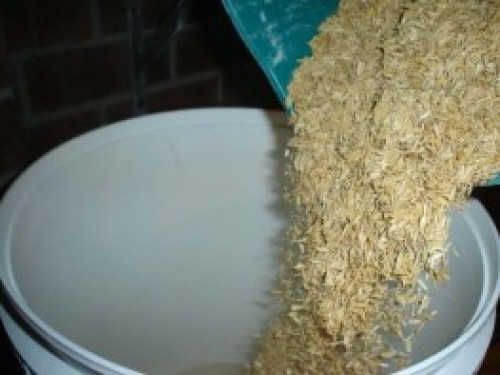 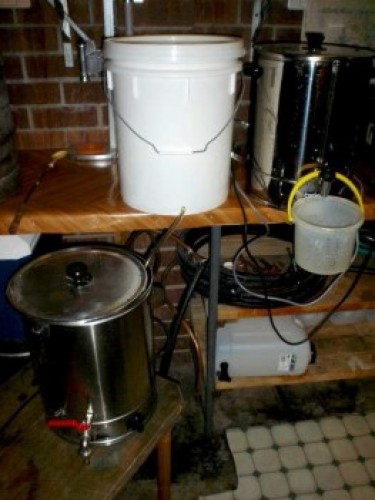 As I mentioned earlier the gluten free grains do not have a husk so we need to add rice hulls to aid filtration. The amount I have used is generally 10-20% of the grain bill, so in our example here with 3.0 kg of grain we need 0.3-0.6 kg of rice hulls. For a shallow grain bed depth I choose the low end of the range.

While rice hulls will help lautering there is a limit, if the grain bed (not the full mash including liquid) gets over about 20 cm deep then the sparge can get stuck just due to static head. The grain bed with 3.0 kg of grain in my 30 cm diameter lauter tun is a bit over 10 cm deep, 4.0 kg of grain still works OK but

So our example brew moves along as follows:

The Rest of the Process

From here on in it's all the same as for "normal" brewing, I'll just run you through the final steps so you can see the whole brew day. 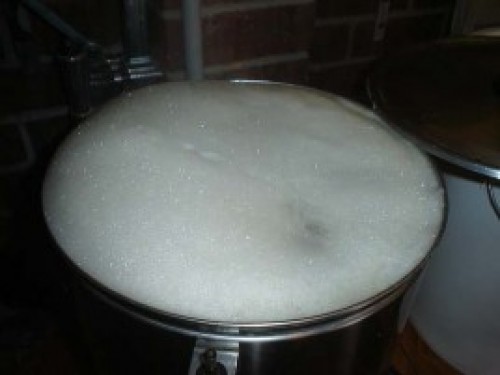 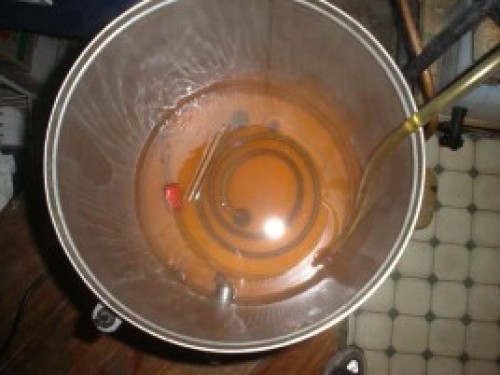 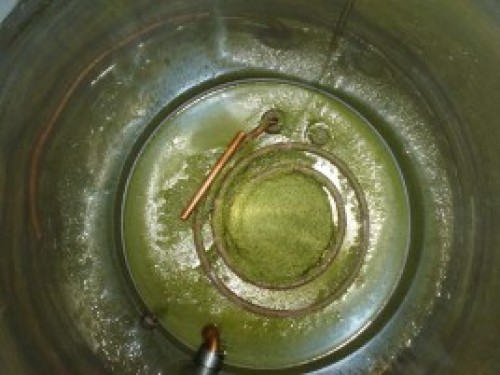 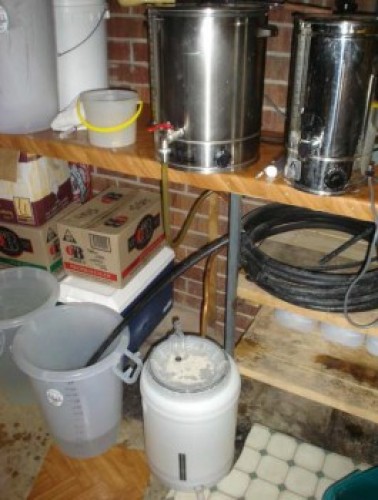 So, that's the brew day over with. On a good day a gluten free brew will take around 8 hours from start to finish, 7 am to 3 pm. Bad days can go about twice as long.

Just for completeness here are the fermentation details.

So there you have it, all sounds so simple. And that's the key, start with a simple recipe and once you're used to the process start playing around with more ingredients to make the beer you want to drink.

Some final tips to help your brew day:

Also read our August 2018 blog 'Catching up with Andrew Lavery'